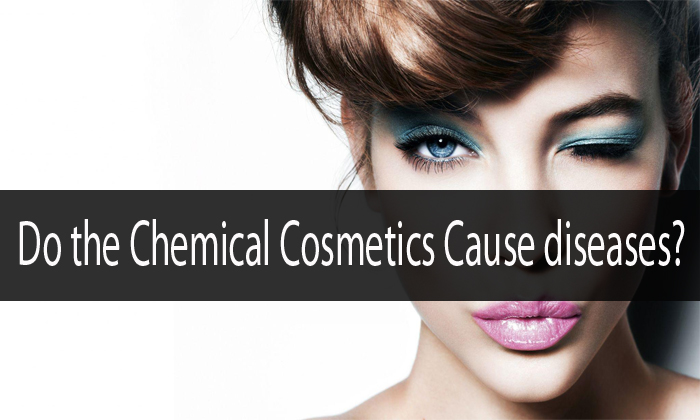 Beauty kills: Do Chemicals Used in Cosmetics Cause Diseases?

Cosmetics are our daily essentials, but how often we dig deep into the list of ingredients mentioned over your favorite shampoo bottle or lotion. There is an array of multi-syllabic ingredients which are actually chemicals in cosmetics products. We usually console ourselves by covering them with fake curtains of safety. But, indeed they are very harmful to our bodies. We just smear products on our body-parts without considering their toxicity.

Not only cosmetics of the USA but for cosmetic products from every corner of the world, having a self-regulated approach. You will be shocked to know that; only 9 chemicals are banned and more than 12,000 chemicals are approved to use. This was first brought to the notice of the FDA in 1930.

There is a group of advocates and researchers who have warned us years ago, about the hazard of chemicals used in cosmetic products. They have backed-up their statements with the ever-increasing unexplained diseases occurring in women.

Women in the US put in almost 12 cosmetic items per day and they include 200 chemicals on an average; the data was revealed by the 2004 study of Environmental Working Group (EWG). A non-profit group for environment and health. Another theory stated that; women use 16 cosmetic items a day.

She further added, “The increases are not just due to genetics and new diagnostic techniques.”One study has revealed that the rate of cancer is declining in the US, but few specific types of cancer such as thyroid, liver, and skin, are increasing.

Not only in the US, but the cancer is spreading its roots more than ever, and reasons for the spread still unknown. Some researchers directly link the increase in the cancer rate with the consumption or use of chemicals in our day to day lives. Shockingly, women are at more risk than that of men.

Leiba says; that carcinogens like formaldehyde that is keratin hair treatments, body soap and nail polish. Coal tar has used in some hair dyes and shampoos are the major concern with the cosmetic products.

Apart from this, the heavy metals lead used in lipsticks and clay-based items. Next, the Parabens and Phthalates are other contents on the list of toxic chemicals used by the beauty industry. It has also been found that PFAS chemicals are used on flame retardants and Teflon.

There are many other groups, along with EWG, that are demanding to increase transparency and regulation on the beauty industry. And the demand of imposing a ban on certain ingredients is continuously increasing like never before.

A later report has stated that almost 40 countries have imposed a ban on almost 1400 chemicals.

PCPC- The Personal Care Products Council is a trade group that represents maximum beauty makeup brands of the US, says the represented products are among the safest” regulated by the FDA.

The president and CEO of the Personal Care Products Council, Lezlee Westine, said “The number of substances on a country’s restricted list is a misleading measure of the effectiveness of regulation in protecting human health and safety,”

She also said, “The materials cited as examples by EWG are not, and would never be, used as cosmetic ingredients because they are pesticides, narcotics, and radioactive substances.”

Westine has said, “We believe well-crafted reforms – grounded in science – will support the industry’s ability to innovate and further strengthen consumer confidence in the products they trust and enjoy every day.”

But the fact is we have very few resources to check the safety assessments on every chemical.  Leiba has said, “But we are not using just one product,”. Also, “Your exposure in just one day can outweigh what this company said was the low dose you had in your product, which is why we are concerned.”

Black women are the major victim of chemicals. They carry a large number of chemicals used in cosmetics, on their body that has harmful effects on the skin. From parabens to phthalates, the endocrine-disrupting chemicals; known to mimic hormones of the human body, found in black women. They can even cause counter-affects if used externally in small doses and lead to severe health concerns.

Carol Kwiatkowski, executive director of The Endocrine Disruption Exchange (TEDX); which is a not-for-profit foundation of research, concentrated on subduing the chemicals affecting the environment, said:

“If you think about the chronic conditions that the world is experiencing now – like fertility problems, thyroid conditions, diabetes, ADHD – these are all heavily impacted by hormones,”.

She then said “Prevalence rates are skyrocketing. We just don’t know what is causing it. It’s undeniable that environmental chemicals are part of the picture. And we just continue to ignore them.”

More than 200 endocrine-disrupting chemicals are actively used in cosmetics and beauty-personal care products; proven by TEDX.

The majority of reforms like FDA and Centers for Disease Control and Prevention have concluded, the effects induced by Phthalates, Parabens, and other chemicals are irreversible.

So, if the industries regulate the use of chemicals and maintain the small doses of chemicals in their products, it will be safe.

Effects of Phthalates and Parabens

Another concern is the mystery of the interaction of chemicals with the human body. No study has revealed how they cause effects, after getting in touch with the skin. Leibe said, “We are talking about how Phthalates may combine with Parabens, for example, because they’re both endocrine-disrupting chemicals,”.

Then she added. “So, are the endocrine-disrupting effects additive? Or do they multiply the effects because they’re both acting on the same hormone systems?”

However, if we look at the number of mixture-studies that work on the chemical-mixtures found in the environment. It is comparatively low but continuously increasing.

But still, there is a great confusion in the world about the relation between chemical exposure and health issues. It occur over the years with the continuous use of products.

“The problems you see that happen from early life exposure, which may be where most of that is coming from. Kwiatkowski stated; When you try to connect that to things like fertility problems, or Alzheimer’s or Parkinson’s, it’s nearly impossible,”

Understanding the cause of the disease still needs great efforts, thus Melanie Benesh, legislative attorney for EWG has warned: “Most ingredients used in our day-to-day life are probably pretty safe,”.

But with all the confusion that the Rea world still has about the use of chemicals- we need to follow a precautionary approach. And, do not ignore like we have avoided the previous hazards.

Leiba has said, “It’s unfortunate that we have to be seeing these health impacts in our society before we make changes,”. “How many people had to die before we realized that smoking actually causes cancer?”

Working Out but Gaining Weight – Unveil the Top 5 Why’s